What is wrong with doctors that they think it is ok to just throw out a diagnoses, without so much as an explanation?

When I was first diagnosed with lupus five years ago, my rheumatologist was scant on detail and my primary doctor only added to the confusion by impatiently assuring me “you won’t die!” (Of course this is not true. In fact, you CAN die from lupus).

So when I eagerly awaited an analyses of my many symptoms from my GI doctor on Wednesday, and was summarily told “it’s functional” — I was left with more questions than answers.  Many questions that went unanswered, such as:

“What does it mean functional?”

“Why do I always look 5 month pregnant?”

“Why am I vomiting all the time?”

“What’s causing all the nausea?”

“Should I avoid certain foods?”

And so on.  I was told, with much exasperation — “you are asking me to explain the unexplainable…!”

So after leaving his office, much befuddled, I turned to the Internet and googled “functional GI dis order” as it was told to me.  I found out that there was such a thing known as “FGID” and that it was not THAT difficult to define after all.

According to the International Foundation for Functional Gastrointestinal Disorder  (www. IFFGD.org):

How a functional and motility disorders are defined

Functional disorder or disease occurs when the main abnormality is the way the body works. In the doctor’s office, no structural or biochemical cause is seen.

Gastrointestinal motility is defined by the movements of the digestive system, and the transit of the contents within it.

Functional GI and motility disorders generally cannot be diagnosed in a traditional way. No inflammatory, infectious, or structural abnormality can be seen by commonly used examination, x-ray, or laboratory test.

Problems occur when nerves or muscles in any portion of the digestive tract do not function in a  coordinated fashion, or when the sensitivity of the nerves of the intestines or the way in which the brain controls some of these functions is impaired. Symptoms commonly include…

It’s good to have some sort of “diagnosis” – I guess.  At least there is research I can do but I am not very hopeful.  Here is another amorphous illness that has no definable cause or cure.  Relief to all these symptoms that I have been suffering from the last five years do not seem apparent.

Hope is not something I have at the moment. 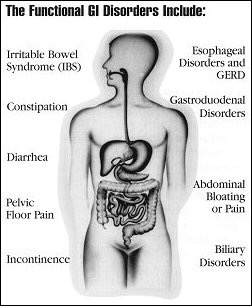